“A Brief History of Our Sacraments”
David Peterson, with help from Bill Klein
Sunday, January 18, 2009

Last Sunday was a special one, for we celebrated in one service both of the sacraments of our Church: a baptism, and the Lord’s Supper. And so I have been invited, as an historian, to offer a very brief survey of the history of the sacraments.

A sacrament is a sacred thing, something very holy. But what that means, how the sacraments work, what they do, whether they are necessary, and even how many there are, has provoked considerable variation and disagreement among Christians over the centuries. Sacramentum is the Latin translation of the original Greek word mysterion, or mystery. St. Augustine (354-430) defined the sacraments as visible signs of God’s word of promise. Christians from the beginning recognized two as having unmistakable biblical foundations. Christ was baptized by John the Baptist, and instructed his disciples to baptize others (Matt. 28: 19). And at the Last Supper he established the basis for communion, or the Eucharist. 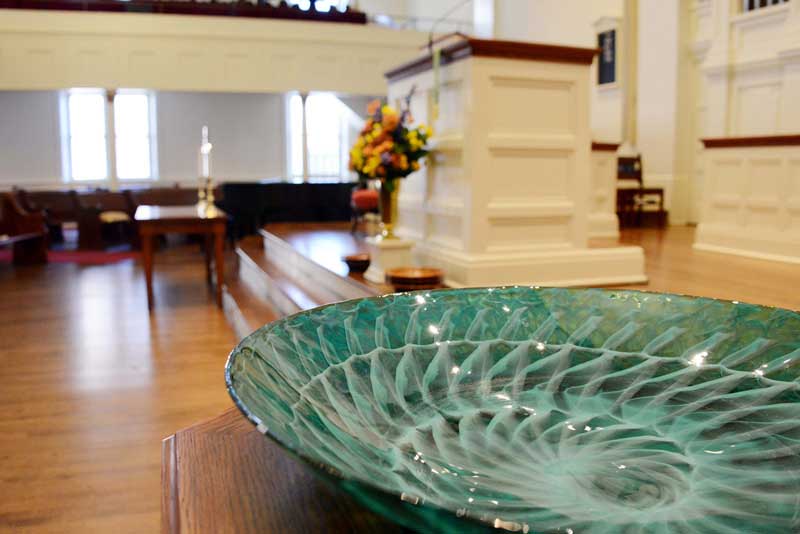 In the early centuries baptism was often a rite of conversion and initiation as well as of purification. Many Christians preferred to defer it to the end of life, lest they foul themselves by subsequent sinning. As Christianity became widespread, and because of frequent infant mortality, it became normal to baptize children at birth; indeed, parents often baptized their own. The belief that Christian faith required some sort of adult profession led to the development of confirmation. Christians’ awareness of their ongoing sinfulness stimulated the practice of confession. Marriage, too, came to be regarded as a sacrament, validated by the free consent of the parties. And it became customary to administer a final anointing, or extreme unction, to those at the threshold of death.

The medieval Church eventually fixed the number of sacraments at seven – down, actually, from the dozens proposed by theologians. Besides the four “life cycle” sacraments of baptism, confirmation, marriage and extreme unction, the Church required that all Christians take communion and confess themselves to a priest at least once a year, normally at Easter. Although only God can absolve from sin, penance offered laity a means of coping with their guilt and of demonstrating genuine contrition before God. And the Church defined the Eucharist. The bread and wine of communion truly were transubstantiated into the substance of Christ’s body and blood, even though the accidents of their taste and appearance might seem unchanged to human senses. This miracle could be performed only by a priest who, through his ordination, received the power of binding and loosing that Christ had conferred upon his disciples (Matt. 16: 19) and, through them, to the rest of the priesthood. Ordination, therefore, was the seventh sacrament of the Church, reserved for the clergy alone. The sacraments were a necessary though not sufficient precondition for salvation, which required also works of brotherly love and faith.

The doctrine of penance was considerably elaborated, and clouded, in the late Middle Ages, provoking Martin Luther’s famous protest in 1517, the Ninety-five Theses, against the abuses of papal indulgence sellers. Convinced that salvation is by faith alone, not works; that all believers are therefore equal to priests; and that faith must be based solely on scripture, Luther scaled the sacraments back to three: baptism, communion, and confession. Other Protestant reformers, more insistent on biblical foundations, reduced them to two, treating confession as a renewal of God’s promise of forgiveness signed in the sacrament of baptism.

Luther believed that the meaning of scripture would be self-evident to any Christian reading the Bible through faith. Nevertheless, Protestants soon fell to quarrelling among themselves. Most accepted the tradition of infant baptism. But there were some, the Anabaptists, who insisted that the sacrament could meaningfully be administered only to adults. And the sacrament of communion became a veritable playground, or minefield, of deeply divisive theological argumentation. Luther believed that it was not the power of the officiating priest, but the presence of the faithful Christian, that produced the miracle at the altar. He accepted the real presence of Christ’s body and blood in the elements of bread and wine. But he rejected much of the scholastic paraphernalia of transubstantiation, embracing instead consubstantiation, the view that flesh and blood coexist with the bread and wine just as humanity and divinity combine in the figure of Christ. There were others, however, such as Ulrich Zwingli (1484-1531), who insisted that the “is” in Christ’s statement “this is my body” (Matt. 26: 26) should be understood as a metonymy, a figure of speech, meaning that the bread and wine merely symbolize, or represent, but are not literally, his flesh and blood.

We Presbyterians of the Reformed tradition adhere to a middle course set out by Calvin. We celebrate baptism both as a ritual of purification and as an initiation into the community of the faithful. Confessing our sins privately to God in prayer, we reaffirm our faith in the sacrament of baptism and in God’s pre-existing love. At communion we believe that Christ is truly present to us in spirit, nourishing and strengthening us through his sacrifice on the cross, which we receive with gratitude. It is our Christian faith that makes these sacraments effective when we are led in worship by the minister of our congregation.

Thanks be to God. Amen.